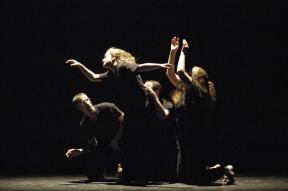 PIECES was organized in April 1992 by J. Davis Hobdy and Ken Armstrong to serve as a performance outlet for Dallas and North Texas area dancers and choreographers. Since that time, PIECES has performed in showcases and festivals in Louisiana, Oklahoma and Texas. PIECES has provided performances through the Neighborhood Touring Program of the Office of Cultural Affairs, of the City of Dallas, and has danced in many industrial shows. They have also been featured guests at several liturgical events throughout North Texas.
In August 1998, PIECES had the distinct honor of being the only Performance Arts organization from Texas to appear in a Cultural Exchange Venue in Amsterdam, the Netherlands. PIECES was honored by the Creative Arts Department of the State Fair of Texas with an award for Special Merit in October 1998. PIECES received an award for Special Mention of the Director Theatre of Khinovna for the performance of Lily Cabatu Weiss’ Undercurrent at Prague Festival 2001 in Mlada Boleslav and Prague, Czech Republic. In March 2007, PIECES was guest artist at Coppin State University in Baltimore, Maryland.